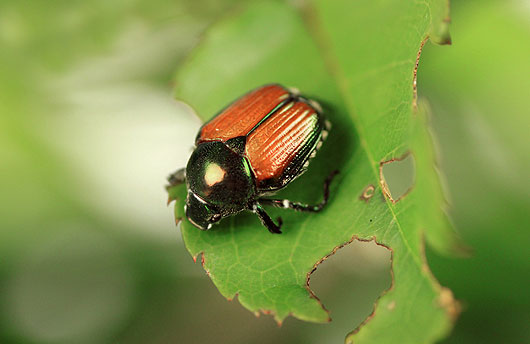 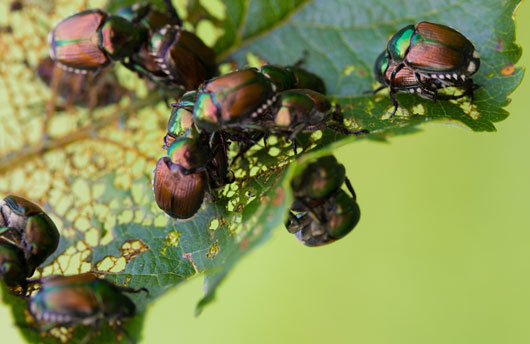 Adult beetles feed in large groups on the tops of leaves.

Japanese beetle is a common pest in North America that feeds on a wide variety of trees, shrubs and many garden plants. Since being discovered in the U.S. in the early 1900s, this invasive insect has become well-established thanks to favorable climate conditions, diversity of food sources and lack of natural enemies.

Adult beetles are about a half-inch long with an oval shape. They are easily recognizable with a brilliant, metallic green body and coppery-brown wing covers. A row of white tufts (spots) are visible from under the wing covers on each side of the body.

Japanese beetles prefer feeding on plants in sunny locations and are rarely seen in densely shaded areas. They feed on the upper surface of leaves, eating the tissue between leaf veins. As they often feed in large groups, plant damage can be significant. If a large enough population is present and left unchecked, the beetles can completely defoliate a tree.

First found in New Jersey, the range and numbers of Japanese beetles have steadily increased over time. The insect is now established in almost every state east of the Mississippi river, ranging north to Ontario, and as far west as Colorado and Arizona.

Japanese beetles spend most of their one-year life as small, white grubs. After undergoing a pupal stage in the soil, adult beetles start to emerge in early summer, generally late May in the southern part of their range and late June or early July in the northern regions. They soon reach peak levels and are often still numerous into September. Adult beetles actively feed for approximately four to six weeks following emergence. After feeding and mating, the females burrow into the soil to deposit eggs. Around two weeks later, the eggs hatch and the larvae feed on grass roots and organic matter until temperatures drop and it is time for them to overwinter. 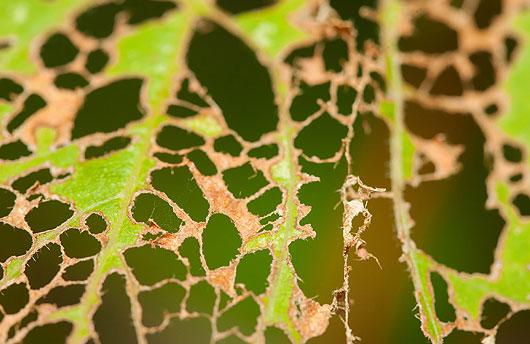 Presence of Japanese beetles results in skeletonization of the leaves.

Feeding activity typically results in skeletonization of the leaves, where a lacelike pattern is all that remains between leaf veins. Injured leaves will eventually turn brown and fall. Premature defoliation may occur with leaves dropping well before autumn.

Trunk injections made at the first sign of adult beetle activity are effective in managing this pest. Preventative soil treatments in late summer or early fall can provide control for the next year. A foliar application should only be considered in cases where there is an extreme level of infestation.